From 1996-2007, I studied cello and piano and graduated from music teaching department in Gazi University in Turkey. I complated my master’s  degree in educational science department in the same university. Between these years I participated in various concerts, in the Czech Republic, Poland, France, Italy, Hungary, Slovakia, romania and Austria. I attended various seminars in Orff Schulwerk, both in Turkey and Salzburg. In 2008 I complated US Kindermusik (online) program. In 2014 together with Gülşah Sever I published my violin instruction book titled “Magic Violin”. I completed level courses İn Turkey. In 2016 I finished “Training Trainer” courses in Turkey and became trainers. I and  Z. Melis Milli had published “Turkish Music with Orff Schulwerk”in 2017. This is the first book which presents Turkish Music using Orff approach. I am also one of published of the “Monolog”magazine which has been produced since 2016.In 2018, the book “Orff Schulwerk with Stories”was published with Z. Melis Milli. In the same time I received a scholarship to attend the Orff Institute Salzburg at the Mozarteum University.I composes children songs and instrument pieces by using Turkish Music and Orff Approach. 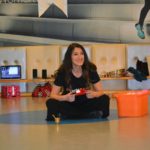